Callaway Rouge is a combination of many things. On the head design front, it’s a sure-fire combination of Callaway Epic and Big Bertha Fusion.On the performance front, it provides a pitch-perfect combination of lower spin and heightened MOI, making this model one of the most forgiving drivers in the market right now. Above all, there’s the Jailbreak effect that makes Rogue drivers a class of their own.In this review, I will help you find out whether the Callaway Rouge driver is worth the cost and your time. I hope that by the end of this review, you will have your answer.But before I start explaining the technical aspects and their corresponding benefits, let’s have a quick glance over the key features of this model.

​The Rouge series, as I might have already stressed earlier, is a successful spin on Callaway’s already popular Epic series of drivers. The Rouge features some significant design upgrades that make it more forgiving on mishits and even make off-center strikes take off perfect center strikes.

The head of the Rouge driver is nearly 10% larger than that of Epic. However, it is glaringly shallower and thinner. This, combined with the X-face and VFT architecture, results in minimal loss of energy on impact. There’s another benefit of it as well. As it thickens the strategic areas of the face, you get a consistently high ball speed and a decent distance, even on off-center strikes.

Unlike the Epic drivers, the Rouge doesn’t feature sliding weight tracks at the back of the head. The result? Saving 15g of weight which is then cleverly repositioned at the lower side to promote more forgiveness. The makers also claim that it leads to dropped CG and 16% tighter shot dispersion.

One of the most distinguished features of the Epic series drivers that made club experts go gaga over it was the use of Jailbreak Technology. Well, let me tell you straightaway that Callaway has made a far better use of this technology in the Rouge line-up.

Many seasoned club experts have gone on record calling it a path-breaking technology. Path-breaking or not, that’s for you to decide. Let’s break down what this Jailbreak technology is and how it works. The Epic lineup also utilizes the same technology, but the titanium bars of Rogue are 25% lighter.

If you are the kind of golfer who craves great distance, ball speed along with a lot of forgiveness, the rigid structure of the Rogue might be exactly what you are looking for. The sole is joined to the gorgeous Triaxial carbon crown. As a result, it increases energy transfer to the ball on impact and the ball goes a good distance and at a great speed.

Everything is a lot lighter with the Rogue driver, be it the hourglass-shaped titanium bars that make the sole and the crown stiffer, or the VFT face which is a lot thinner and faster in this model.

​I think I’ve already made myself quite clear on the fact that I deem the Callaway Rogue as one of the most forgiving drivers made to date. If you are an entry-level golfer, you will be able to see and feel it yourself. The Triaxial carbon composite crown, aggressive sole, larger footprint of the head, all come together to leave more room for error.

The 25% lighter Titanium bars run from the crown to the sole to stabilize the head. As a result, even mishits look like straight center shots. How cool is that? The ultra large yet super lightweight carbon composite surface area saves about 15g of weight which is then distributed higher up and down.

The sliding weight at the rear of the head has been dropped in this model to reduce and redistribute another 15g. This minor tweak also significantly lowers the CG. This promotes increased MOI and lowers the ball spin. Let me be more precise. The combined vertical and Horizontal MOI of Rogue is as much as 7.5% higher than the Epic.

The statistics also say that it is 16% higher than Callaway XR16 which is another masterpiece from the house of Callaway. Long story short, Callaway helps you preserve your performance and add a great distance even on mishits.

One of the most promising aspects of the Rogue series drivers is that it is fit for various kinds of swing speed. Whether you are a newbie, an intermediate who is not very good with drivers or a seasoned golfer, this model has something great to offer everyone.

Even if you have a tendency to spin the ball too low, you will find the driver head optimal for gaining the desired speed and distance. Due to the near-perfect implementation of Boeing aero package, the transition of the head into the face during the swing is softer and results in a 2% increase of the club speed. Also, the sound on impact is extremely satisfying on the Rogue, much better than the muted sound of the Epic.

The powerful sound gives you confidence that you have smashed the ball just the way you wanted. 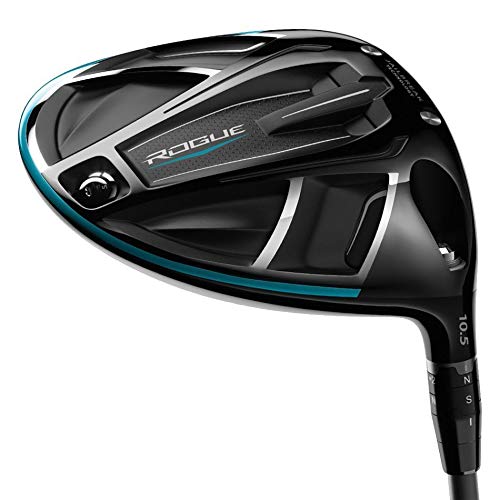 Lastly, the Callaway Rogue comes with a choice of 4 stock shafts. You can easily juice out optimal performance from your driver by tweaking the shaft and weight options on the head until you figure out the perfect specs for your swing speed.