The Callaway Rogue Iron is the newest addition to the Callaway Irons 2018 series. The oomph factor of the Rogue Iron models can be attributed to the 360 Face Cup Technology (source). Most of you may know that the Face Cup tech is nothing new to the Callaway drivers and irons. But the makers have gone one step ahead this time by coupling a variable thickness with it.

The Rogue Iron throws a curveball by bridging the gap between confidence-boosting design and versatility, excellent playability, and incredible confidence. All of these at almost half the price of Epic irons. Epic enough, isn’t it?

Before I get down to the technical nitty-gritty, let me quickly list down the key features of the model for you. This will help me give you some context for the information that are about to follow.

The impeccable forgiveness, distance, and playability can be attributed to the Face Cup technology paired with variable face thickness. With Rogue Iron, Callaway has taken this technology to a whole new level. Let me elaborate on how this technology benefits your game.

The variable face thickness or VFT (source) enlarges the COR area. In simpler words, this means it can deliver a tremendous ball speed across a large area of the clubface. Consequently, you get more carry distance than you’d get with a hybrid or a cavity iron.

However, the brains behind the design of the Rogue iron claim the COR to be approximately 0.835. So, at the end of the day, the distance you get really comes down to the launch conditions. The large profile at address and the sizeable Aldia Synergy 60 Graphite Shafts clearly indicate that the model is specifically targeted at mid and high handicappers.

Given the amount of forgiveness, ball speed, distance, and ease of launch it delivers, I can safely assume that Callaway has selected an appropriate target market for Rogue Iron series.Despite the huge size, the iron doesn’t feel overwhelming while taking shots. It’s just more meat and less fat, exactly what I expect from a forgiving iron.

The double white score lines located at the bottom help with the alignment to some extent. But for the most part, it is there mainly for the cosmetic purpose.

The Rogue isn’t called the most tech-rich, mid-budget game-improvement iron for no reason. The high ball speed, distance, and easy launching ability of the iron can be partly attributed to the Internal Standing Wave. The tungsten weight has been shrewdly relocated directly behind the center zone to position the CG (source) over there.

The location of the CG controls launching trajectory, thus providing you with great forgiveness even on off-center strikes. Compared to Epic Irons, you should be able to get higher ball speed and spin coupled with a higher flight with Rogue Irons. The clever weight distribution at the back and low of the iron promotes high flight.

​One of the common issues with distance irons features a large head is the metallic “hit” sound associated with it. It doesn’t generate a lot of feedback. To get rid of this bugbear and improve the sound of the iron, the void inside the head is filled with Urethane Microspheres injected into the cavities.

These air-filled pockets absorb the harsh “hit” sound and dampen the vibrations. To sum up, I can safely say that it sounds better than most budget thin clubfaces. 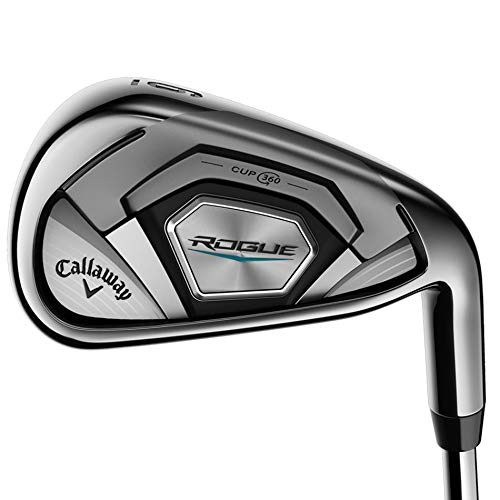 The standard Rogue Iron model is aimed at mid to high handicappers who are looking for an equipment to get some extra help. Beyond a shadow of doubt, it is exceptionally forgiving and delivers high ball speed and good distance even on fat shots.

But if you are in search of an iron with great ball shaping capability, the Rogue Iron Pro is the best one for you. It features the all top-notch tech of Rogue Iron models. Plus, it is thinner and more compact in shape. It comes with True Temper XP 105 Steel Shafts which makes managing the distance easier.

It also provides more precision and playability on each shot and to me, it is the most handsome-looking Iron of all the Rogue Iron series models.

The 5-iron Rogue X is an out-distance maximizer. Apart from giving you maximum distance, even when you hit a couple of fats, it also appears quite forgiving. This is probably due to the inclusion of a wide sole that promotes forgiveness through the turf.

The combination of a more precise CG position and larger club head also makes the model incredibly forgiving on mishits. It also features the longest shaft and the strongest loft of 4 new Rogue Iron series models. The sound on impact can be best described as bombastic.

It is louder than Pro but not more than the standard Rogue Iron model. If you ask me whose sound I find more satisfying, I’d have an inclination toward the Rogue iron. This is maybe due to the fact that the urethane microspheres mute the harsh sound without affecting the distance.