Callaway Rogue – the name itself brings warmth to the heart. The concept behind its technology comes from Japan which is lighter, stronger, and longer.

Rogue X is lighter in weight and longer in length, with stronger lofts compared to the Rogue Standard. Its wide sole pulls the Centre of Gravity lower and deeper to create an easier, higher launch and longer carry. Having the 360 Face Cup expanding the hitting area, it also offers more forgiveness compared to the standard Callaway Rogue irons.

This iron is all about distance. The head might seem a bit larger than usual, but the extra forgiveness and extra yardage it yields is appealing if you are a mid to high handicapper. Also, if you are looking for more yards gain in overall distance with slower swing speed, this beast is for you.

If you ask me, I had the best experience with Rogue X in overcoming my handicap and it further allowed me greater distance than any other iron. Out of 5 stars, I give it 5 without a second thought.

Callaway Rogue X is a beast at gaining distance which delivers you an extra 7 yards distance on average. If you are a player with a high handicap and low swing speed, then you can’t be convinced to go for any other game improvement iron after you have given Rogue X a try.

The combination of lighter, longer shaft with a stronger loft unlocked Rogue X’s superb performance. Its 360 Face Cup incorporates a shallow and flexible rim which both flexes and releases at impact and increases ball speed.

Its thin and faster face has Variable Face Technology (VFT) for expanding the face portion to allow faster ball speed, more forgiveness and much distance to off centre hits.

The CG is placed deeper and lower in the wide sole which delivers an easy, high launch but not a high flight at the same time, so the ball can be carried long enough and its speed remains high enough.

You can position CG with the tungsten weight in each iron with precision. This heavier tungsten weight can be significantly used in a small space to control CG location precisely for each iron.

Another great feature of Rogue X is that it’s very forgiving to the off centre shots.

The face uses the same 360 Face Cup which is the thinnest Callaway has created. Because of its spread over a larger area than the standard model, ball speeds from off-centre hits can be maintained more easily.

I personally recommend high handicapped players to go for the Rogue X as it delivers more distance at off center shots and slower swings. But if you prefer feedback, then Rogue X might not be your thing. There is hardly any feedback except on the true mishits.

You’ll find the weight of Callaway Rogue X extremely light compared to their standard models. Despite the light weight, this iron is tremendously strong.

​Rogue X is a fine piece with a dashing look. The graphite shaft is very soothing to the eyes.

The upside of Rogue X’s thin clubface is a faster ball speed and more distance and the downside is excessive vibration which generates an unpleasant sound and feel. Urethane can be used to dampen vibration to improve sound and feel, but it can also greatly reduce the face’s ability to flex, lowering COR and ball speed.

But Callaway Rogue’s elastic-urethane microspheres provides the sound and feel benefits of urethane without compromising COR or ball speed. So, the feel at impact is superb.

If you are looking for constant performance, then yes, go for Rogue X. But, since the sound is almost as solid for most areas. However, with the feedbacks to the mishits, you might be a bit disappointed. 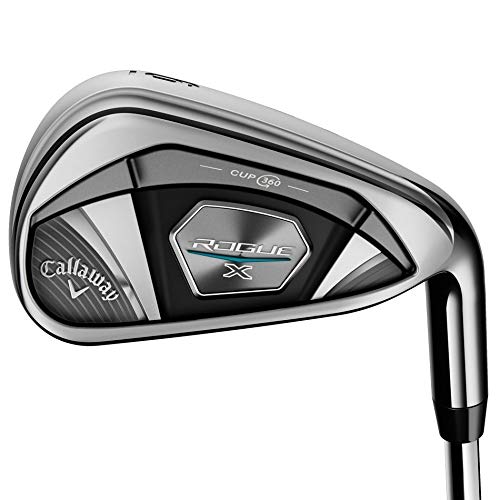