Golfers use a vast range of clubs in the game. Depending on situations, you might need 13 to 14 different types of clubs. From drivers to fairway woods and multiple irons with several heights and loft adjustments – there are plenty of choices to make.

You need to make up your mind about the launch angle, trajectory, ball speed and the spin you want to have in your very next shot. It will direct you to choose the perfect clubs for each situation. Taylormade is a leading brand in the industry that produces various types of golf clubs.

The Taylormade M6 iron is their latest arrival in the iron golf club segments. Interestingly, the company calls it a game improvement iron. This iron is the subject for our review today.

​In 2019, Taylormade incorporated this brand-new technology in their latest M5 and M6 irons. It connects the sole and top edge of the club by using a structural beam. The result is profound as it will stiffen the head, strengthen the chassis and provide more stable impact on the ball.

​After extensive research, experiment and computational modeling; the manufacturer installed a brand new speed pocket that is faster than previous Taylormade irons. You will see that the face slot is absent since it has been replaced with the thru-slot.

This newly designed speed bar uses only a small mass. Along with the disappearance of the face slot, it makes the iron lighter. Up until now, it is the most flexible and widest speed-slot made by the maker. It expands the flexible portion of the face that in turn boosts the carry distance and ball speed.

​The damping polymer will mute unnecessary sound and vibration. This compression damper activates during impact, enhances the sound and reduces much of the vibrations. It will also improve the feel and therefore boost your confidence during the game.

​The iron comes with a 360-degree fluted hosel. It is designed to enhance playability for all sorts of players. As a result, it will keep the center of gravity low and generate high trajectory.

​Taylormade’s very own, patented feature known as the Inverted Cone Technology (ICT) has been included in this iron. It comes with a very thin face that increases the ball speed. Consequently, it presents the club with a huge sweet spot.

Let’s talk about the design. The company puts plenty of efforts in the development of this club. So, every little detail in the design matters.

The Taylormade M6 iron is big and wide. It is bigger than the M5 iron. You will get a wide sole and a very large profile to address.

It comes with the KBS max 85 steel shaft. Alternatively, you may choose Atmos orange graphite shafts made by Fujikura. The 360⁰ hosel and undercut design relocates much of the weight to the back of the head. Additionally, a very lightweight metal is used in the hosel that goes around the shafts.

The ultra-thin face design turned the iron into one of the fastest clubs in terms of ball speed. Its ball speed initially exceeded the maximum allowance set by UGC. For this reason, the engineers had to do some revision in order to cut some speed and make it a legal club in the market.

They altered the thickness in several parts of the face to make the sweet spot more accurate. It led to the dispersion of some speed and distance. For this reason, many players call it the fastest club within the legal limit.Meanwhile, the structural bar stabilizes the iron. Together with the speed pocket, it boosts the ball speed, carries and distance.

With the 7-iron, you are likely to get a ball speed of 118 miles per hour. The lofts are about 1.5⁰ stronger than the M5 irons. It will carry the ball long, more than 165 yards in most cases. Moreover, the iron will achieve about 17.6⁰ launch angle.

The ball will also fly higher in the air. According to some estimation, it will gain a maximum height of 18 feet.

Because of the inverted cone feature, your shots will be straighter; even the misplaced ones. You may ask, how could this be possible?

Well, the answer lies in its off-centered positioning that gives such directional bias. Brilliant, isn’t it? The speed bridge and speed pocket links together and moves the point of deflection to the lower area of the face. So, you will get superior ball speed even when you mishit toward the heel or the toe region. Ultimately, it will generate better results.

The center of gravity is remarkably low in these irons. It became possible because of the advanced design. Notably, the 360⁰ undercut helps shift much of the weight to lower portions of the head. The M6 will also have a high moment of inertia and a more considerable margin for error.

Not only will it be forgiving, but it will also transfer the energy more efficiently during impact. So, you will be able to launch higher with minimum efforts.

The lofts are relatively stronger which will give you a positive feel. It has a larger address profile that will boost your confidence in intense situations during the game.

It is built for low-to-high handicap players. Especially, the wedges are designed to level up their game. Both right and left handed golfers will find it easy to play with this club. The Golf Pride Tour Velvet grip is used near the handle to provide extra support.

Taylormade used advanced hybrar damping system and multi-material badges to improve the sound and feel. A firm topline is used to mute the vibrations further.

​Furthermore, the M6 has an aluminum/ ABS structure and viscoelastic adhesive that will aid in dampening the sound even more.

Overall, it is a very user-friendly club iron that will never disappoint you. 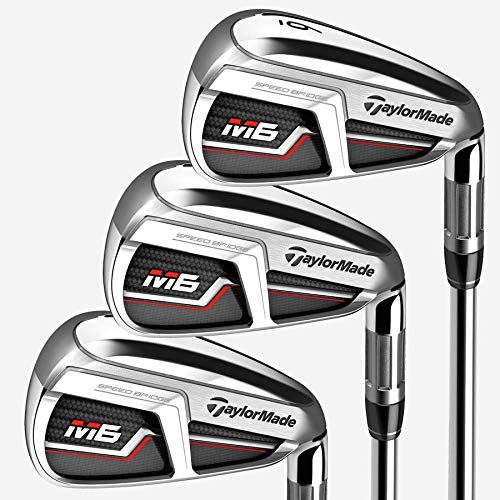 It is build for Low to High handicappers. So, yes you can buy it and increase your performance.

When did the TaylorMade m6 come out?

Taylormade M6 iron is one of the hottest iron clubs in the market. It looks big, feels light and delivers superior performance with more forgiveness. It may sound a bit hollow, but it is for better reasons. You will find the sound and feel to be very responsive in most cases.

We think, the M6 iron has sufficient attributes to uplift your game. You should give it a try.